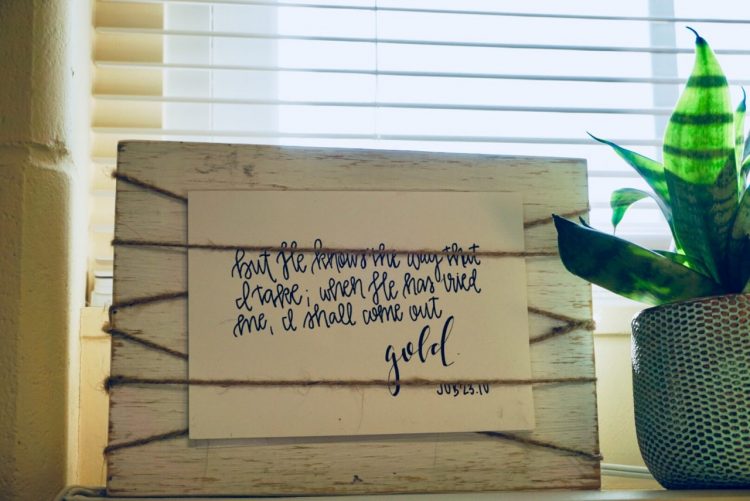 Beside my bed rests a small, white-painted wooden block wrapped with twine—straight from Waco, Texas. The twine holds a postcard sized print with an artistically printed Bible verse. I’ve looked at the verse every morning all semester, but I honestly never gave it much thought.

Then I was standing in worship at church a couple of weeks ago and started thinking about how much I have missed blogging. I knew it was time to write again. I remembered the verse held on a wooden block by twine, the verse I glanced at every morning yet never took enough time to ponder. The Lord speaks softly like that sometimes.

But he knows the way that I take; when he has tried me, I shall come out as gold.

At this point in the book of Job, Job has been through some vicious pain. Out of all the people who loved God on earth, Job really loved God. God said he was blameless, upright, feared God, and turned away from evil (Job 1:1). Job was the best of the best. But Satan had his doubts. He thought Job was faithful just because God had blessed him with a sweet family, good health, and plenty of food and possessions. In one of the most theologically confusing passages of the Bible, God gives Satan (aka an adversary or a being standing in opposition to God in some translations) permission to test Job under one condition: he cannot take Job’s life (Job 1).*

Well, Satan does pretty much everything except kill Job. Job loses his children and his property, he becomes sick, and he receives only bad advice and judgment from the men he once considered friends (Job 1-2). Job lamented his birth (Job 3, 13, 17), grappled with hope (Job 7), and pleaded with God to remember him (Job 10). By chapter 23, he’s wondering where God is.

Any of my bad days don’t even compare to Job’s suffering—not even close. But Job asks some really hard questions that I’ve often faced. Job’s doubts, anger, and pain feel so true to me—to all of us. Job is so human.

This semester has been one of the most challenging so far. The past year has led me from place to place, leaving me longing for all the people and places I have left behind. I’ve stepped into several new roles on campus that have prompted feelings of inadequacy. I’ve been struggling with how fast college is passing by and realizing the weight of all the decisions I have to make over the next couple of years. I have reached the core workshop classes of my writing program, and I’m flailing in the revision process as the semester nears its end. And, well, writing is brutal.

I want to say that I haven’t had time to blog this semester, but the truth is I just haven’t used my time to blog. After a long day of writing, it’s hard to sit down and produce more words. And blogging makes me work through thoughts I don’t fully understand until I start moving my fingers across the keyboard. Blogging takes time and emotional energy that I haven’t felt like giving. But somewhere in the mess of the semester, I felt peace about not blogging—for a little while at least. Instead, it was a season to live a story and learn.

Sometimes the Lord hands us times that require that we commit to the hard work of learning. We have to sit down right in the middle of our mess and fight to figure out who we are and what we believe. We don’t always have to move and act; often we just have to be still and listen—to God, to the people we love, and even to ruthless professors. The last three months have been one of those times of learning for me.

Learning is a process of refining.

The beautiful thing about Job is that he grapples with faith and life, but at the end of the book he doesn’t give up on God. He’s in the worst situation we could possibly imagine—probably worse than most of us will ever experience. He becomes really angry at God and about the tests of faith that he faces. But in chapter 42, Job turns to God again and repents for everything he has said against Him. And the Lord is still there. In fact, he blesses Job and makes his life more prosperous than it was in the first place. Job learned who God is through bitter suffering. Job doubted God and even insulted Him, but ultimately he trusted that his despair would result in gold. And it did.

When he has tried me I will come out as gold…

Every morning I have seen those words. Even though my trials are so minimal compared to Job, many days I haven’t focused on becoming gold. Instead, I have focused on my to-do list, my grades, or my plans for the future—things that are meaningless if God is not in them. But I want to learn. I want to become gold.

One of the biggest lessons we learn from Job (and from the whole Bible) is that God’s way is much different than our own way. Being gold isn’t flashy and charming like we might think—not if it takes so much suffering to get there.

Gold is God’s gaze when he looks at us as His children and calls us righteous despite how many times we have doubted Him.

I think God’s way often looks like seasons of learning that are from Satan himself and lessons that don’t make sense to us. But if we endure, we will come out as gold—we will be refined by our Father.

*If you have questions about the book of Job (like me), I really recommend checking out this resource.