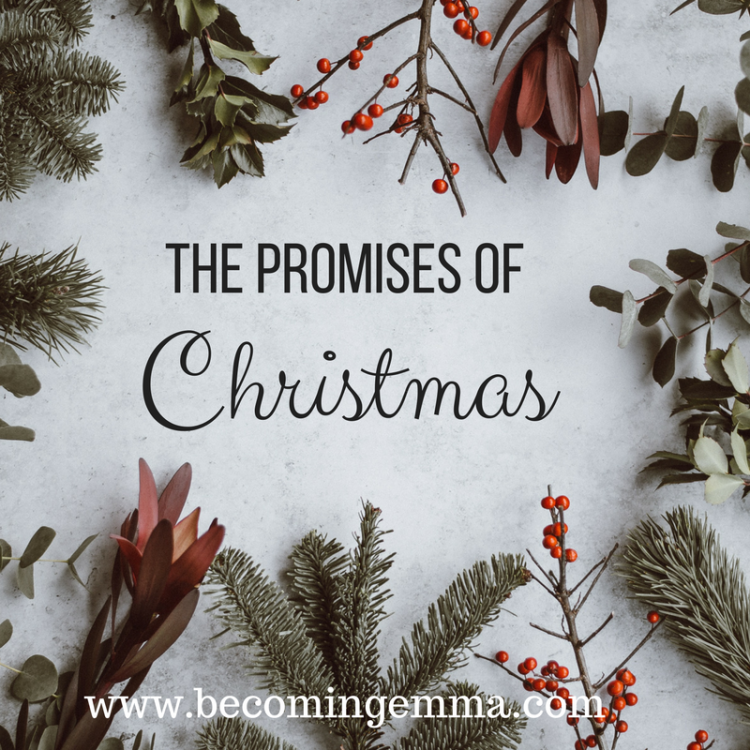 This Advent season, a pattern in the events leading up to Jesus’ birth has caught my attention: God likes to make promises to His people. Between the accounts of Matthew 1-2 and Luke 1-2 alone, we see God make big promises beyond comprehension to Zechariah and Elizabeth, Mary and Joseph, the shepherds, the wise men, Anna, and Simeon. And guess what? All the promises He makes here are about Jesus. As we celebrate the birth of Christ this Christmas, we celebrate God’s fulfillment of His promises.

Let’s start with Zechariah and Elizabeth. I imagine Elizabeth was past hoping for a child. According to Zechariah, he himself was an old man and Elizabeth (wisely stated) was well along in years (Luke 1:7, 18). Yet God had a different plan. The prayer that Elizabeth and Zechariah long considered unanswered, God finally revealed had been heard all along. He promised them a child, not just any child, but the child that would prepare the world for the long-awaited Savior. God’s promise to Zechariah and Elizabeth doesn’t make sense and He wasn’t answering their prayer as they thought He would. It seemed impossible. Rightfully skeptical, Zechariah answered God, “How can I know this?” (Luke 1:18). Sure enough, though, Elizabeth conceived and John the Baptist was born. God was true to His promise.

God makes the most significant and unbelievable promise in history to Mary. The Christ Child that had been anticipated for over four hundred years would be born through Mary’s womb. She would carry the Son of God, who was fully man and fully God. Imagine the weight of that promise. Of course, Mary must have had a million questions, but we just know that she asked, “How can this be?” (Luke 1:34). We all know how the story ends. Mary delivers God’s Son in a dirty stable in Bethlehem.

Joseph, a little surprised by his fiancé’s baby bump, doesn’t buy Mary’s story. So, God sends an angel to Joseph in a dream to make a promise to him too. The angel reassures Joseph that Mary is indeed carrying God’s Son. By the time Joseph wakes up, he’s convinced of his fiancé’s miraculous pregnancy and he marries her (Matthew 1:24). The promise, of course, is fulfilled and Joseph stays true to God’s will by naming the baby Jesus.

God makes a promise to the wise men through a star and to the shepherds through the song of a heavenly army (Matthew 2:2 and Luke 2:13). Both groups of men come to Jesus in obedience and worship. What an act of faith to set out on a long journey on the sole basis of hope in the promise of a baby. Jesus was waiting as God had promised.

Finally, Simeon and Anna saw the fulfillment of God’s promise that they had been long anticipating. As Luke 1:26 says of Simeon, “It was revealed to him by the Holy Spirit that he would not see death before he saw the Lord’s Messiah.” And for Anna, Luke 1:8 says, “She did not leave the temple, serving God day and night with fasting and prayer.” I love Anna and Simeon’s expectation of Jesus. They, as all of Israel had for hundreds of years, lived in the hope that they would see the promised Messiah. And they lived to see the promise fulfilled.

This faithfulness brings so much hope to my waiting soul. Sometimes my prayers feel unheard. God’s will often seems impossible from my perspective and I ask “How can I know this?” and “How can this be?” I only wish I could say that I always follow quickly in obedience. But this year, I’ve been learning that God really is true to His promises. After moving and making a big transition this year, I found myself walking in faith through God’s will for me. As I look back, I see that God has been teaching me of His sure-fulfillment all year. The story of Christ’s coming only brings God’s gentle reminders full circle as this year ends.

God’s promises were accomplished in Jesus. We know the ending. And now, we wait on Jesus to return. Just as God was faithful in sending the Messiah, He will be faithful to fulfill His promise to come again. So this Christmas, let’s celebrate God’s promises to us.

Upon seeing Mary, Elizabeth exclaims, “Blessed is she who has believed that the Lord would fulfill what he has spoken to her” (Luke 1:45). My prayer this Christmas is that I would have the faith to believe what the Lord has spoken to me. When Jesus humbly came to our world, God’s ultimate promise was fulfilled. If God fulfilled His promise of salvation through a baby that lived among us and came to conquer our sin and death, then God will be faithful in whatever we are walking through today. Even though the fulfillment may not come how or when we expect, it is sure to come. May we rest in God’s fulfillment today, celebrating His promise fulfilled in Jesus and anticipating His promise to come.

3 thoughts on “The Promises of Christmas”